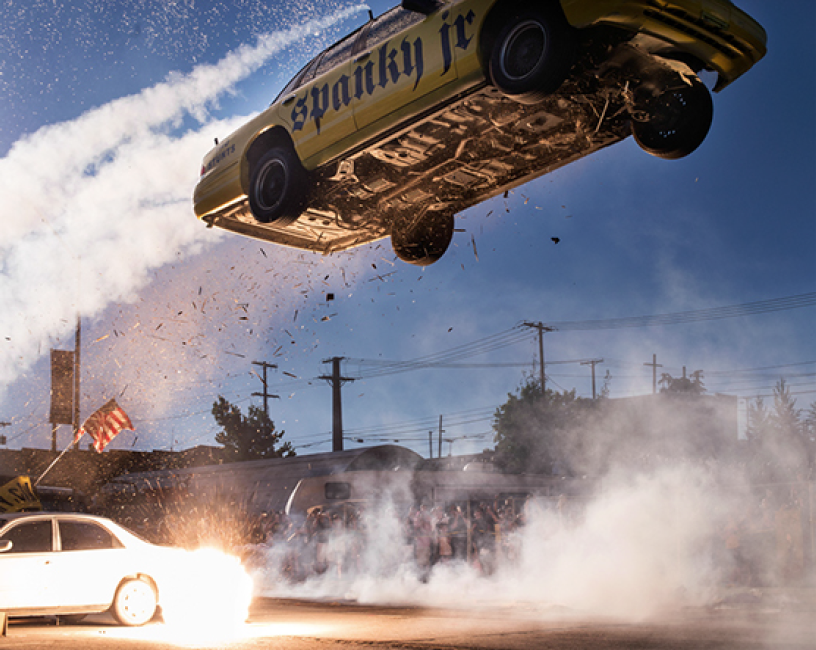 When I was six, I planned to be just like Evel Knievel. Naively, I couldn’t understand the consequences of my choice. Imagining myself in his striking leathers, I raced my bike down a hill like a kamikaze on a mission for the sake of a stunt. At the bottom of the hill, with too much speed, I crashed, tumbled hard across the gravel, laid there unconscious—my prize was spending four days in the hospital with a fractured skull. Injury aside, I gained bragging rights. In the 1970s, Evel Knievel was the daredevil—steadfast, virile, courageous, and determined. Knievel’s illustrated legend captivated an audience. Clad in red, white and blue, he embodied the fantasy of soaring over obstacles—even if the landing wasn’t pretty.

Color Me Lucky is inspired by Evel Knievel’s swagger. It explores desire, sexuality, masculinity, image, and risk. It’s about the momentum that carries you forward, even when you know there’s a train wreck ahead. My work about this popular daredevil opens up a conversation about what attracts a woman or man to act on or witness risky behavior for the sake of a thrill. In these images, Knievel is the metaphor to decipher if we all have a bit of Evel in us.

Alexis Pike is a sixth generation Idahoan calling on the geography of her genes while focusing on the mythologies of the American West. Pike received her BFA from Boise State University and her MFA from the University of Iowa. She’s been a Top 50 finalist for Critical Mass and has exhibited widely, at venues including Blue Sky Gallery in Portland, Sun Valley Museum of Art, Missoula Art Museum, Photoville, Guate Photo Festival, Aperture Foundation and the Bienal de Curitiba in Brazil. Her work’s been featured in Photo District News, Harper’s, LensCulture, and Wired.com and has two monographs—Color Me Lucky published by Aint-Bad in 2019 and Claimed: Landscape published by Blue Sky Books in 2014. She lives in Bozeman, Montana and is a Professor of Photography and Interim Director of the School of Film & Photography at Montana State University.

This exhibition was curated by Douglas McCulloh and organized by UCR ARTS. Support provided by the College of Humanities, Arts, and Social Sciences at UCR, and the City of Riverside. Additional support provided by Montana State University.

Image: Alexis Pike, from the series Color Me Lucky. Courtesy of the artist.